An angel that is supposed to bring good luck if touched is one of the phenomena of the Cathedral of St. Bartholomew at the Pilsen city square. People longing for granted luck effects on human destiny are often willing to wait in long queues.

According to the legend, the angel started bringin luck on the day on which a Rakovnik medieval executor was getting married. Such a person could not enter the wholy place, so he had to be substituted during the ceremony (by the altar only) by a friend of his.

While the bride and the substituting bridegroom were being married, the executioner was praying by the outer rear altar of the church. After having ended his prayers, rising to his feet, he incidentally touched the head of an angel forged on the bars of the church. The act of course had its witnesses - the Pilsen burgher ladies immediately spread the news and the legend came to existance. In medieval superstition, whatever subject touched by the executioner was immediately ascribed to having miraculous effects.

The legend about the miraculous angel soon widely spread in all the region. It keeps spreading in our modern times as well. You are welcome to come in person and have a try to ensure your future too ... 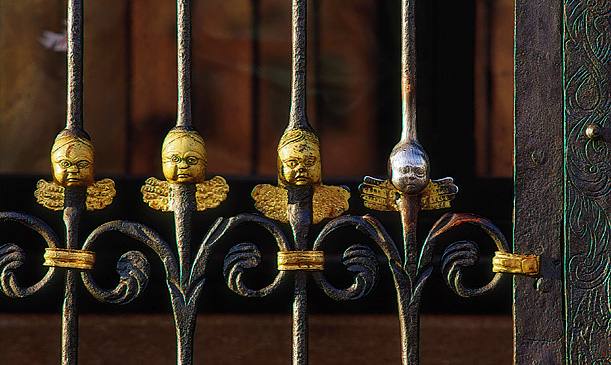