Development of the Plzen population is closely tied to the industrial boom in the city. A considerable growth in the number of inhabitants came in the 19th century, namely between 1869 and 1890, following the expansion of Skoda Works and of other industrial enterprises. The population was increasing relatively dynamically until the end of the 19th century and then in the first third of the 20th century. After World War II, the number of inhabitants decreases due to the transfer of German population and migration of residents to the borderland.

The second half of the 20th century is at first remarkable for a rapid increase in population. New housing estates were built with a large quantity of prefabbed flats housed by people from the wide surroundings of Plzen. However, a stagnation began in 1980s and later on even a decline in the number of inhabitants which was apparently caused by the changed demographic behaviour of the population in general as well as by a diminishing quantity of flats finished by sanitating and re-constructing objects in the centre of the city. By the end of 2003, Plzen-city had a population of ca. 164 000 inhabitants.

AN OVERVIEW ACCORDING TO AGE 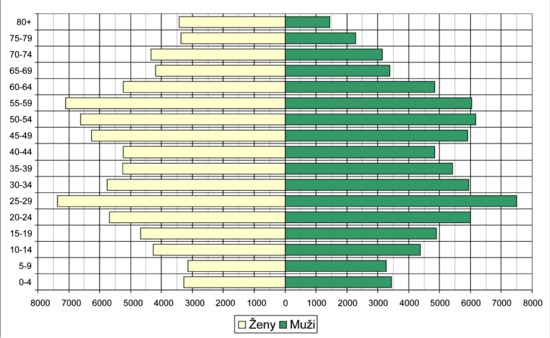