The city of Pilsen is divided into ten urban districts.

Urban District Pilsen 1 was established as an administrative area in 1981 during a housing boom connected with a great influx of new residents. Nowadays, it’s number one in Pilsen in terms of population (50,000 residents).This district also leads in clean air, total land area covered by housing estates, the number of ponds and comprehensive leisure facilities.

Urban District 1 is located in the northern part of Pilsen and is sometimes also called “the Northern Suburb”. It the old city quarter called Roudna, along with several formerly independent villages and settlements, such as Bolevec, Bíla Hora and Košutka. Later, the district was incorporated with the Lochotín residential area and then gradually connected to the Lochotín, Bolevec, Košutka and Vinice housing developments.

The city of Pilsen is, according to Law No. 128/2000 Coll. Municipalities, as amended, a statutory city divided into urban districts. According to the Status of the City of Pilsen, as amended, the urban area is divided into 10 districts. Urban District Pilsen 2 - Slovany comprises the following parts-Božkov, Doudlevce, Hradiště, Koterov, Lobzy and the Eastern Suburb.

The land registry area of the district is currently 1639 hectares of land with approx. 35,000 residents. It is located in the southeastern part of the city, bounded on the north by the main railway station, on the west, by the Úhlava and Radbuza rivers, and also partly on the east by the Úslava River. Urban district Pilsen 2 shares  borders with the following districts Pilsen  3, 4, and 8.

Urban District Pilsen 3, with 3,546 hectares of land, is one of the largest districts in the city. As of January 1, 2012, the population was 50,312. The district connects the historical part of the city with newer areas such as  Bory, Doudlevce, Skvrňany, Nová Hospoda, Zátiší, Valcha and Radobyčice.

Urban district Pilsen 4 was named Doubravka, after one of the original settlements in the area. It is located in the eastern part of the city and is bordered on the north by District 1, on the south by District 2, and on the west by District 3. The district incorporates the formerly separate areas of Doubravka, Letná, a Lobzy, which are now a unified urban area, and the outlying communities of Bukovec, Červený Hrádek, Újezd a Zábělá.

These days, Doubravka is the most dynamically developing parts of Pilsen. New residential areas with family houses are being built in areas between outlying towns, and vacant lots in urban areas are being built up with new housing developments. The local land development plan for the near future calls for continued residential and industrial development. Currently, 25,000 people live in Doubravka.

Urban district Pilsen 5 - Křimice is located in the west of Pilsen. The district covers nearly the entire land register area of the historic village of Křimice and a small southwestern spit of land in the historical village of Radčice near Pilsen. The Mže river flows through the district.

Urban District Pilsen  6 – Litice is located in the southern part of the City of Pilsen. The Litický potok (Litice Creek) and  the Radbuza River, including the part where the České údolí (Czech Valley) dam was constructed, both flow through District 6.

The first historical mention of the village is from 1211. In 1970, after 6 years of being a separate municipality, Litice was once again connected to the City of Pilsen. Since 1990, it has been an independent urban district.

Radčice has been a part of Pilsen since 1976 and became Urban District 7 in 1990. Urban district 7 has an agricultural character due to the Mže River and the fertile land in its vicinity. There is a dense forest in the north of Urban District 7, and in the centre of the district, there is a preserved village conservation area, including a village green with a chapel and historical estates. An industrial park for light manufacturing has been built on the western edge of the district.

Urban district Pilsen 8 – Černice covers an area of more than 5 km2 in the southern part of Pilsen. Its northwestern boundary is formed by the right bank of the Úhlava river. In the southeast there is a large forested area with a mountain bike trail. These trails lead to the ruins of the castle Radyně . The historical center of Černice was built in the first half of the 15th century, when it belonged to the town of Pilsen. Nowadays, its Selská náves (village green), is a historical preservation monument. A microbrewery has recently opened in the village.

In the northeastern part of Urban District 8 there is a mall called Olympia - Pilsen with a cinema, post office, numerous shops, a Kika furniture store and a gas station. In the older residential area, Tyrš Elementary School, which offers a learning program called ´´Začít spolu´´ (Start together), has recently been renovated.

Malesice is located just to the northwest of Pilsen. The first written reports of Malesice were documented around 1239, when Zdeslav, a son of Ratmir, owned the village. One of the other owners, perhaps the youngest Děpolt of Zbiroh/Děpolt of Malesice, who appeared in sources from the years 1297-1321, built Kyjov castle nearby, which included Malesice. The Kyjov estate became the property of the Monastery of Kladruby in 1365.

As with other religious estates, the village of Malesice with its Kyjov castle was probably taken over by West Bohemian nobility, or rather by rich Pilsen burghers, who acquired properties around Pilsen during the Hussite period. In 1462, the village of Malesice belonged to Anthony Harsdorfer from Nuremberg, who settled in Pilsen and married local native Barbara Fritz during a period of regular contact between Pilsen and Norimberg.

Urban district Pilsen 10 – Lhota was created on January 1st in 2003, the result of an agreement to connect the village Lhota to the city of Pilsen. The district is located on the southwestern edge of the city and covers 389 hectares of land. Urban District Pilsen 10 – Lhota is a part of the territorially subdivided statutory city and has institutional authority in the area of independent and delegated powers.

In 2008 there were about 900 residents, compared to the year 2002 when Lhota had around 400 residents. This shows the dynamic construction growth in the area, with population growth projected to continue. 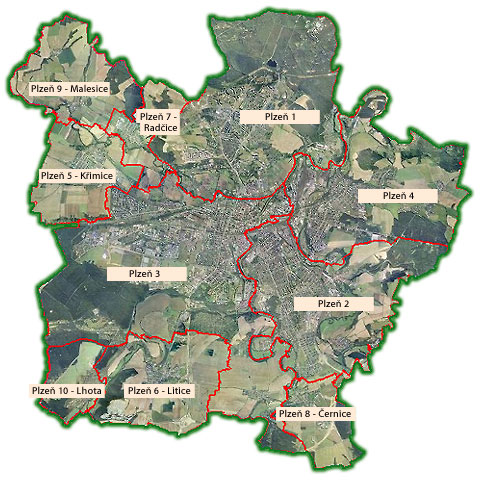