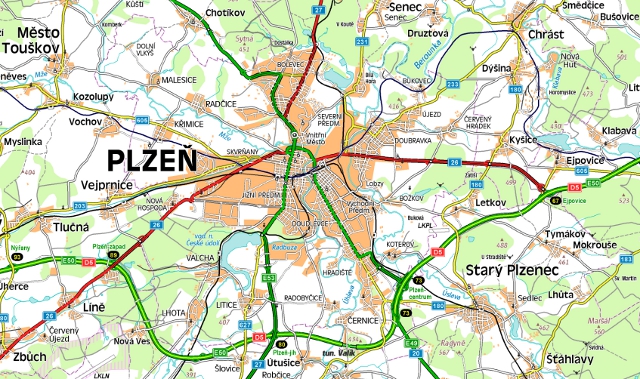 Pilsen is well connected to the road network due to its location on the D5 motorway linking the Czech capital of Prague to Germany, where the motorway joins the A6 Autobahn at the Rozvadov/Waidhaus border crossing. The A6 leads from the Czech border through Germany and all the way to France.

Pilsen is the crossroads of three main arteries in the European road network:

When travelling in and around Pilsen, the Integrated Pilsen Transportation (IDP) project makes it possible to use a single proof of payment that is valid throughout the entire system. The price of the ticket depends on the zone where the person is travelling. The inner "P" zone includes a total of eight cities and towns (Dýšina, Chrást, Kyšice, Pilsen, Smědčice, Starý Plzenec, Tlučná and Vejprnice), and the external "Z" zone is made up of 36 towns. The municipal mass transit system in Pilsen is composed of three tram lines, six trolleybus lines, 24 bus lines serving Pilsen and the suburbs, and three night bus lines.

The city lies on the major internationalCycleway No.3 Regensburg - Pilsen - Prague. A system of sports and recreational paths is being built along the river valleys, and a network of cycling paths that follow existing streets is being built to provide access to developed areas. Three interregional cycleways also start in Pilsen: No. 31 from Pilsen to Nepomuk and Blatná; No. 35 from Pilsen to Manětín and Žlutice; and Friendship Cycleway No. 37 from Pilsen via Stříbro to Neustadt and on to Nuremberg and Paris. Numerous tips for bicycle trips, useful advice, links and news can be found at www.plzenskonakole.cz.

Distance of selected cities from Pilsen