The Footsteps of Jewish Pilsen 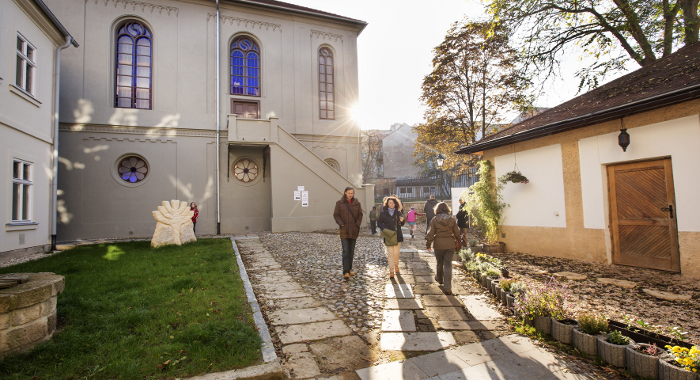 Many monuments that refer to a long history of the local Jewish inhabitants can be found in Pilsen. The Great Synagogue, the third largest in the world, dominates a part of the city. Other monuments, such as the Old Synagogue,  or residential interiors designed by a world famous architect  Adolf Loos,  are not so striking, as they are hidden to the visitor´s eyes. Nevertheless, discovering them will be for you very rewarding.

The Great Synagogue of Pilsen is the second largest synagogue in Europe and the third one in the world. The building designed in neo-Romanesque style was consecrated in 1893.  During the second world war it was seriously damaged and after 1948 it served as a warehouse of military materials, which saved it from demolition.

After a costly reconstruction the synagogue was reopened. Today it serves mainly for cultural purposes. Due to its excellent acoustics concerts are often organized here. During the year there are also many exhibitions.  In the high tourist season till the end of October the Synagogue is open every day from 10am to 6pm except for Saturday and Jewish holidays.

Interesting testimonials  to the life of Jewish inhabitants in the first third of the 20th century are residential interiors, created in Pilsen by the world famous architect Adolf Loos. He came to Pilsen because of his friend, a Viennese journalist Karl Kraus, whose relatives, the Hirsch family, lived in Pilsen. They ordered the first contract for reconstruction of their flat in Plachého street, located near the city centre. The flat is today destroyed, but Loos gradually got contracts from other rich Jewish businessmen and industrialists and by 1932 he had completed at least 13 residential interior adaptations and house reconstructions.

The trademark for all his works was the use of high quality, mostly luxurious natural materials (marbles and rare woods), timeless solution of practical functions in the flat, mainly storage space including built-in wardrobes. There are many written records about Loos´s stay in Pilsen, above all the popular book written by Loos´s third wife Claire Beck, who was the daughter of one of Loos´ customers. Unfortunately, due to the WWII and under the communist regime the knowledge of activities of the world famous architect  in Pilsen faded. The interiors were rediscovered for public as late as 10 years ago: Since April 2015 four interiors have been gradually reconstructed and opened  to the public in three guided routes. Commented tours are offered every Thursday, Saturday and Sunday in the high season from April to October and from November to March only every Thursday and Sunday at predetermined times. If the tour is not guided in a foreign language, visitors´ sheets are available. All information about tours for groups and individuals can be found on www.adoflloospilsen.cz

The Old Synagogue is hidden in the block courtyard in the Smetana Park near the historical centre opposite the Great Theatre. The building dates back to the second half of the 19th century, when 40 Jewish families lived in Pilsen. After years of neglect the dilapidating building was reconstructed and has been recently opened to visitors. Besides the richly ornamented interior the visitors can see the garden of memories, where stones with the names of Nazi terror victims commemorate the Pilsen victims of the Holocaust.  Till the end of October the Old Synagogue is open every day from 10am to 6pm except for Saturday and Jewish holidays.