The Liberation Festival Offers Interesting Programme in May 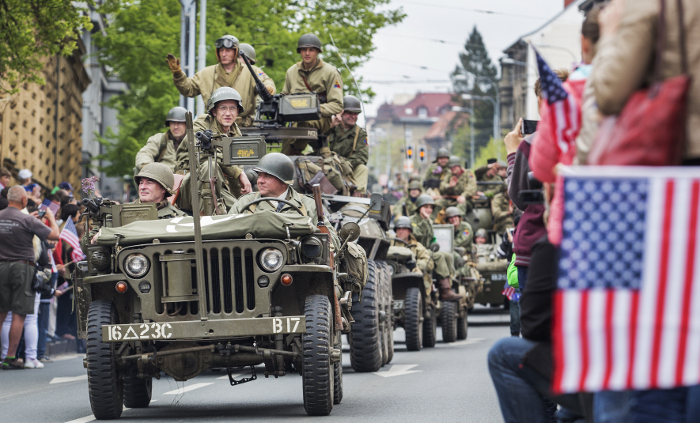 The upcoming spring season means the period of intensive preparation of the Liberation Festival which celebrates the liberation of the city of Pilsen by the US Army. The West Bohemia metropolis is one of the very few cities in the Czech Republic which were liberated by the US Army at the end of the World War II. Most of the cities were liberated by the Russian Red Army. Since the Velvet Revolution the city of Pilsen commemorated this event by several-days long festival. Local inhabitants still come to meet “their” military veterans and together they remember the events of May, 1945. The visitors of the Liberation Festival can enjoy rich military-historical and cultural programme.

After the last year 70th anniversary of the city liberation and the end of the World War II this year is a great opportunity for a certain change of concept of the festival. However, the visitors will not miss anything. Traditionally, a pieta will be held, you can meet with the veterans and listen to their interesting stories, there will be popular military camp-sites of military history clubs. The Army of the Czech Republic promised to participate too and they will demonstrate the activities of the active reserve army in the DEPO2015 where there will be the Street Food Market at the same time, this time with its focus on typical American cuisines. Styled atmosphere will be enhanced by a historical field mess and music in the rhythm of swing.

An attractive novelty of this year´s celebration will be the Ride of Freedom which replaces the already traditional parade of historical military vehicles called the Convoy of Liberty. Last year this convoy included 300 pieces of military technology. The Ride of Freedom goes through Pilsen on Saturday, May 7th and it will include about 20-30 jeeps carrying the honorary guests – the war veterans of the World War II.  The Ride of Freedom will be completed by a traditional meeting of the veterans with public on the Republic Square. For the audience it will also be very attractive to watch a historical battle or to participate in an all-day-long competition “From Normandy to Pilsen”. This competition is designated mostly for families with children. The Republic Square offers rich cultural programme.

For detailed programme of the festival go to www.liberationfestival.com