In April New Touristic Season Starts in Pilsen. Where to Go? 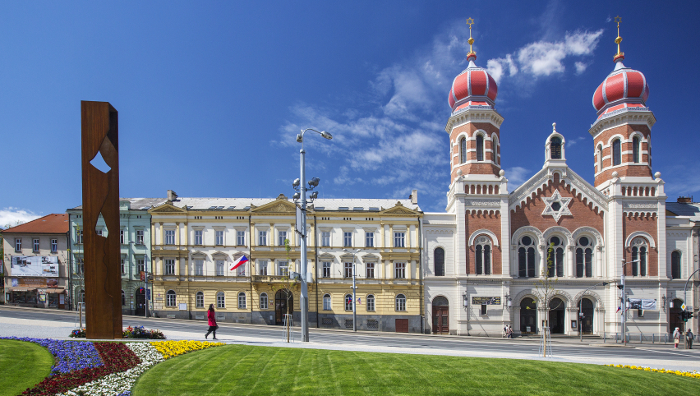 Spring Pilsen definitely has its unique charm. City alleys in full blossom around the historical city centre invite you for lovely walks. First tables and chairs appear outside small cafes and restaurants where you can enjoy sunny days and have something good to eat or drink.  Many touristic attractions are woken up after long winter sleep and they prolong their opening hours. We prepared for you a brief guide of local touristic targets which open their door for tourists at the beginning of April. Longer opening hours are provided during the main season also by the Loos Interiors, Pilsen Historical Underground and guided tours of the Pilsner Urquell Brewery.

Newly reconstructed interior and interesting exhibition introducing Jewish habits and traditions is provided by the Old Synagogue which is hidden by other city houses near the Great Theatre.   In the vicinity a memorial of holocaust victims is located called The Garden of Memories. Since April also the Old Synagogue is opened daily except Saturdays and Jewish festivals.

After a winter break the gates of the Museum of Ecclesiastical Art open too. The museum is located in the building of the former Franciscan Monastery.  Inside the museum you can see exhibited collection of ecclesiastical objects and clerical art but also original Gothic interiors, frescos dating back to the 15th century or the oldest wardrobe in the Czech Republic. The museum opens daily except Mondays.

The tower of the Gothic cathedral provides a splendid view into the surroundings of the city reaching to the Sumava Mountains and under good weather conditions even the Alps can be seen. The tower is accessible during the whole year.  During the winter time the guided tours are limited to the cathedral interior only. Starting April 1st the cathedral can be visited from Wednesday to Saturday from 10 a.m. to 4 p.m.

One of the most beautiful Pilsen gardens is opened during the season only starting April 18th and ending October 14h. The garden is located quite far from the city centre but you can enjoy a lovely walk and when the weather is nice the whole afternoon can be spent in pleasant atmosphere. The garden is opened from Wednesdays to Sundays.

If you visit Pilsen with children and the weather is nice the DinoPark is the right place for you. The DinoPark features giant models of prehistoric lizards and dinosaurs.  At the same time it is located close to the Zoological Garden so both places can be visited together. Since April it is opened daily from 8 a.m. to 6 p.m.

You can visit a guided tour of Pilsen Loos interiors three times a week since April- e very Friday, Saturday and Sunday. For the overview of guided tours and booking go to www.adolfloospilsen.cz.