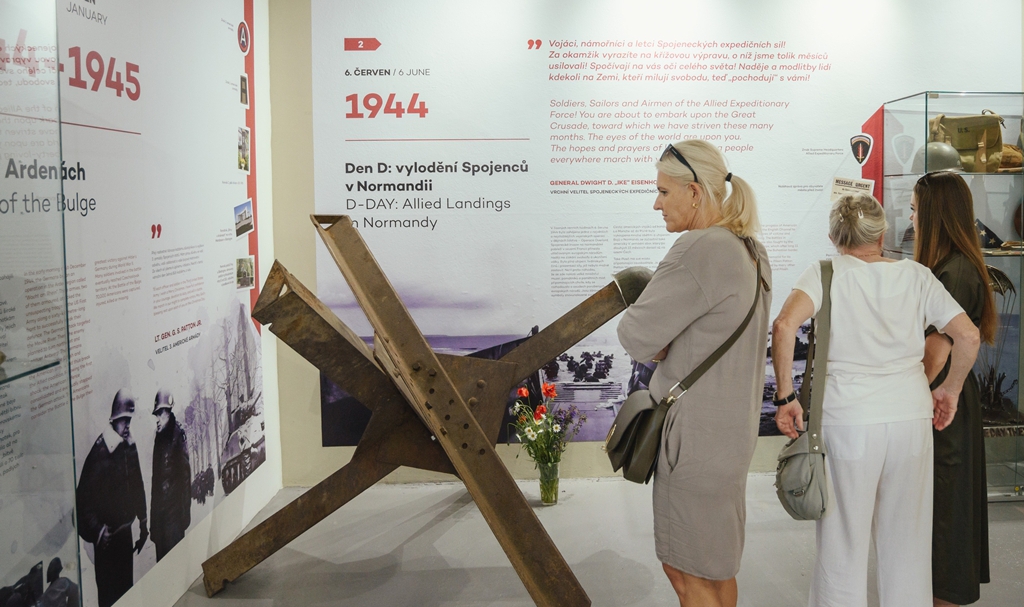 On the occasion of the 75th anniversary of the Normandy Landings, the Patton Memorial Pilsen prepared a new exhibition. Although the area of the museum remains the same, the new exhibition offers a more complex view of the Allies actions in Europe at the end of the Second World War. It maps not only the liberation of West Bohemia but also the whole journey which the US soldiers had to make from Normandy, through the Battle of Bulge to Pilsen. Visitors of the exhibition will enjoy new displays, some of them originate directly from the battle fields, others are gifts donated by veterans or their families.

The authors of the new exhibition – Milan Jíša, Ivan Rollinger and Karel Foud prepared a brand-new concept. The new exhibition is devoted not only to the liberation process of West Bohemia but it also illustrates the difficult journey the US soldiers had to make starting with the Normandy Landings, through the Battle of Bulge and ending with the liberation of Pilsen. The exhibition also maps the period which the units spent in Pilsen and its surrounding region. The museum displays artefacts which were found in the battle fields for the very first time. During the last 15 years, the museum has collected many priceless artefacts which until now were stored in its depository.

“We have expanded the exposition so that we could include the items which were found in real combat sites, such as the M1 Garand bayonet, the bowls from the Omaha Beach or ammunition, flasks and medical supplies from the fights in Ardennes. You can also see the so-called Czech hedgehog, which was originally a part of the pre-war Czechoslovak fortification and, after occupation by Germany, it was used in many thousands of pieces for the construction of the Atlantic Wall in the northern France,” explains the museum curator Ivan Rollinger.

The information banners and exhibits together create a comprehensive story for each of the mapped events. For example, the part of the exhibition which is devoted to the bombing of Škoda is completed by the original wing of the shot down B-17 bomber in Čemíny. Likewise, there is the jeep debris from the tragedy near the village of Díly where several members of the 90th Infantry Division perished after riding on a mine or artefacts from the fight for the town of Cheb. There are also belts of the tank M4 Sherman.

“We have received a whole range of artifacts by donations from veterans or their families. The most valuable items for us are the personal items of the legendary General Patton whose grandson George Patton Waters regularly visits the city to participate in the Liberation Festival. Veterans are also linked to the only part of the museum which did not undergo any major modification during the reconstruction, and that is the wall with the signatures of the veterans. Since 2005, dozens of veterans have visited the museum. Many of them no longer live, so it is a relic that we really appreciate,” adds Ivan Rollinger.

In addition to the completely new exhibition, thanks to the partial reconstruction of the Peklo Cultural House, the facilities for visitors were improved. The museum will now be open from Wednesday to Sunday from 9 am to 4 pm. Pre-booked groups can take part in the guided tours of the museum with a curator at any time.