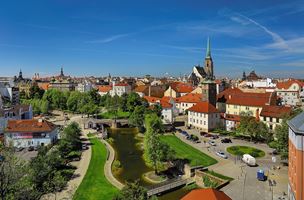 The municipal parks, which arose on the site of former municipal walls, surround the historical centre of the city. There, the visitors may spend their time on pleasant walks or sitting on the park benches or visiting one of the nearby cafés or restaurants. During the year a lot of cultural events and festivals are held here. The parks are surrounded by several interesting historical buildings. You will find the statues of prominent Pilsen personalities including the famous puppets Spejbl and Hurvínek.

You may start strolling through the parks for example from the amazing Neo-Renaissance building of the Great Theatre. The Study and Scientific Library is located in adjacent Smetana´s Parks. In front of the library there are often held outdoor exhibitions. Opposite the building of the library, through the entry of the house in Smetana ´s Parks no. 5, you can get to the courtyard where there is the newly reconstructed Old Synagogue. If you keep walking to Kopecký´s Parks, on the right side you will see the Art Nouveau building of Měštanská beseda (Municipal Meeting House)  with several meeting halls and lounges, a cinema, theatre and a famous Art Nouveau café.  The fountain nearby Měštanská beseda plays Smetana ´s compositions every hour. The monumental Neo-Renaissance building of the West Bohemian Museum is another remarkable building situated in the park circuit. The museum with a depositary of more than two million items belongs to the biggest museums in the Czech Republic. 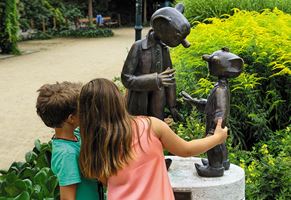 Near the museum you can admire a fossilized tree in the ferny corner. A few metres away directly in the park you will find a sculpture of famous Pilsen locals – the puppets Spejbl and Hurvínek. If you pass the  hotel Continental dated from the beginning of the 20th century, you will get to Křižík´s Parks. So-called Proluka is located on the left side. Here, in the empty space between two houses you can see a preserved part of the municipal walls. Nowadays, this place is used as an occasional stage for open-air events. The largest mural painting in the Czech Republic, so called Theatrum Mundi, is definitely worth seeing. This painting shows the most famous Pilsen personalities, such as the city founder, King Wenceslas IInd and the popular actor Miroslav Horníček.

Where else should we finish walking in the Municipal parks other than in Mlýnská strouha (Millstream), which is one of the friendliest  parts of the city centre. Today, the dry canal situated on the east side of the municipal walls used to bring water to the Manor mill. This romantic place used to be a favourite destination of local people walking there. They could also ride small boats there at the beginning of the 19th century. Therefore, this place was called Pilsen Venice.  It was filled in later. Today you can find there an artificial little lake in the middle of the beautifully cultivated park area, which is ideal for relaxation. The childern may enjoy playing on unusual colourful monkey bars in the shape of human heads.