The beautiful Gothic cathedral of St. Bartholomew with the tallest church spire in the Czech Republic dominates the Pilsen central Square of the Republic. You will find there a wide range of amazing historical buildings with a lot of restaurats and cafés. During the whole year there are held dozens of cultural events, festivals and celebrations. Traditional seasonal markets and farmers´ markets take place there too. At the time of the city foundation the square with its dimensions 139 x 193 m was one of the bigeest in Europe. These days this square boasts three gold modern fountains, which represent heraldic figures from the Pilsen emblem –an  angel, a camel and a greyhound. At the square and its surrounding area there are several museums, galleries and other treasured historical monuments, which are worth visiting. It is also pleasant to spend time sitting on benches and walking in nearby municipal parks.

Right on the Square of the Republic there is the Renaissance Jewel –  the City Hall which has been serving its purpose since its creation. It was built according to the plans of an Italian builder Giovanni de Statia in years 1554-1559. Its building is decorated with sgraffito showing the city emblem and Czech rulers.  In the lobby of the City Hall special exhibitions are held. In the back room behind the lobby there is a 1:200 scale model of the historical Pilsen centre . You can visit these places free of charge every day. Opening hours are from 8:00 am to 6:00 pm.

On the right side in front of the City Hall there is the Plague Column with the Baroque replica of Pilsen Madonna on the top. It was built in 1681 in order to protect the town from plague. Even the legendary Emperor Rudolf IInd resorted to Pilsen to be protected there from plague.

Modern fountains designed by Ondřej Císler are placed at three corners of the Square of the Republic. Since their creation they have been dividing local people, some being fans, others opponents. The reservoir is made from black Chinese granite. The water falls from gilded gargoyles which symbolize an angel, a greyhound and a camel; the motives of Pilsen emblem. The gargoyles consist of bronze castings of different heights. About 720 grams of gold was used for their gilding. Seven kinds of gold leaves having the size 80 x 80  millimetres are combined to create structures with different colourful effects. 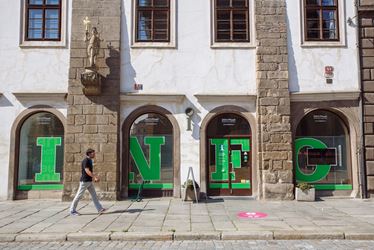 The house next to the Pilsen City Hall was at the time of plague epidemic in years 1599-1600 the seat of the Emperor Rudolf IInd., who had moved to Pilsen for 9 months with his court from Prague in order to hide there against this serious illness.  Pilsen became for a short time the capital city of the Holy Roman Empire. Today on the ground floor of this house with the statue of the Knight Žumbera the Tourist Information Centre is situated , where you can get all necessary information for your visit in Pilsen. You will certainly choose a nice gift from the wide choice of souvenirs offered there.

The Chotěšov House – The Ethnographic Museum

This originally Gothic house was owned by the Chotěšov Monastery. The rear building has  an open Renaissance loggia; the only one of its type in Pilsen.

Nowadays, the house is a part of the Ethnographic Musem of Pilsen region which offers an authentic view of the life of Pilsen people from Gothic period until the first half of the 20th century. You will see there historically furnished lounges and rooms, a black kitchen, two folk rooms, an amazing exhibition of folk costumes of the Pilsen region, a Baroque pharmacy and Gothic cellars.

The Museum of Marionettes

One of the most important Renaissance buildings in Pilsen, with the high Renaissance facade with the rich sgraffiti and sculpture decorations, was built as a result of the renovation of the Gothic house. In this building the Musem of Marionettes is located. On display is a great exhibition of Pilsen puppetry, which refers to famous Pilsen natives such as Josef Skupa, Jiří Trnka or the puppets Spejbl and Hurvínek.  Unlike other museums in Pilsen, in the Musem of Marrionettes you are able to not only watch the exhibits, but you can also play your own puppet  theatre with some of them.